The crisis of sexual abuse within the Catholic Church, and the institutional denial and cover up, has left many people of faith shocked by the lack of appropriate response toward survivors.

Archbishop Mark Coleridge of Brisbane, the president of the Australian bishops’ conference, has called for a Copernican revolution on sexual abuse in the church and a shift in Catholic culture so that abuse survivors, not clergy, shape the church response.

In an interview with Crux, published during the recent Vatican summit on sexual abuse, he also compared victims of clergy abuse to Christ crucified.

Unless you see that what’s happened to the abused has happened to Christ and that therefore, they’re Christ crucified in their needs, all the external commands in the world won’t do it.

In our work, Rocio Figueroa Alvear and I have interviewed sexual abuse survivors and show that recognising Jesus as an abuse victim can help them, and help the church to change.

Jesus as victim of sexual abuse

There are good theological grounds for recognising a connection between Christ and those who have been subjected to abuse. The words of Jesus in Matthew 25:31-46 say that what is done to others is also done to Christ, and this has been explored in the work of Beth Crisp.

In Matthew 25, and presumably in the words of Archbishop Coleridge, this connection is at a theological or metaphorical level. But recent work has offered a strong argument to go beyond the theological connection and to see a more literal historical connection. In my own work, and writings by Elaine Heath, Rev Wil Gafney and Australian theologian Rev Michael Trainor, it is argued that Jesus does not just share theologically in the abuse, but that he himself experienced sexual abuse during the crucifixion.

This may seem outlandish at first. When Katie Edwards and I wrote on stripping as sexual abuse, many comments showed readers were perplexed that we could be seriously suggesting this. For many people, the initial reaction is to be startled and shocked. Some ask whether it is meant to be a serious suggestion, or say it is just jumping on a #MeToo bandwagon. However, as Linda Woodhead points out, if you look at it more closely you may start to think differently.

Read more:
#HimToo – why Jesus should be recognised as a victim of sexual violence

The torture practices of military regimes in Latin America during the 1970s and 1980s offer two key lessons for understanding crucifixion. First, the torture was a way for the military authorities to send a message to a much wider audience. Anyone who opposed the military would know what to expect.

Second, sexual violence was extremely common in torture practices. Sexual violence was a very powerful way to physically and psychologically attack a victim and his or her dignity. Sexual humiliation and shaming victims could destroy their sense of self and stigmatise them in the eyes of others.

The use of crucifixion by the Romans fits with both of these. Crucifixion was a form of state terror which threatened and intimidated many more people than the victims themselves. The way that prisoners were stripped and crucified naked was an obvious way to humiliate and degrade them, and should be recognised as a form of sexual abuse. 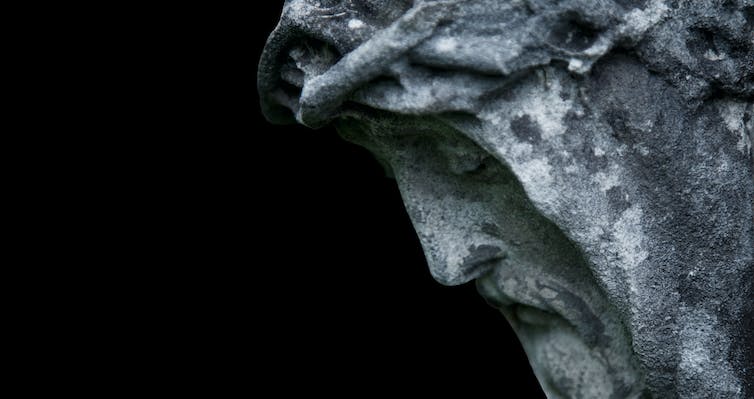 Crucifixion was a form of state terror and victims were likely to be stripped.
from www.shutterstock.com, CC BY-SA

In research published this month, we interviewed a small group of Peruvian middle-aged male survivors of clergy abuse on how they respond to the historical argument that Jesus was a victim of sexual abuse. We had interviewed this group before on how the sexual abuse they had experienced when they were teenagers and young men had impacted on their lives.

In these new interviews, we asked if they had considered Jesus as a victim of sexual abuse and how they viewed the historical and biblical evidence for it. We also asked if any such recognition could be helpful for them and other abuse survivors, or the wider church.

Most interviewees were initially surprised by the idea, but saw no problem in accepting the historical evidence and argument. Only one participant initially said that not enough evidence was presented to show it was sexual abuse but he later explained that he saw Jesus’ nakedness as a form of complete powerlessness.

Participants were evenly split on the question whether it would help them. About half felt it would not but the other half spoke positively of the connection it created between Jesus and survivors.

On the significance for the wider church, all of the participants agreed, without hesitation, that it would have a positive impact. All of them suggested that church ministries, clergy and lay, should embrace this topic.

They felt it would help the church to achieve more solidarity with survivors, and also, a more realistic and historic vision of Jesus. If the wider Church embraced this history and deepened it theologically, it might help towards changes in the church which prioritise survivors, and ensure they are treated with more compassion and solidarity. If the church is seeking a Copernican revolution on sexual abuse, recognising the experience of Jesus for what it was is surely an appropriate starting place.

This article is republished from The Conversation under a Creative Commons license. Read the original article.

The Crucifixion of Jesus: Torture, Sexual Abuse, and the Scandal of the Cross – Book Review

Reading with self-care when reading in vulnerability

16 Days of Celebrating Activism… Calling Out – and then some!

16 Days of Celebrating Activism… The Publication “When Did We See You Naked?”

This site uses Akismet to reduce spam. Learn how your comment data is processed.